Lent 2 Take up your cross 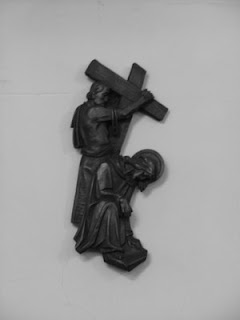 The Jews at the time of the life of Jesus were expecting a particular person who had a definite identity, or so they thought. They were expecting the Jewish Messiah, the saviour who would lead them, a strong leader who would throw off the yoke of the Romans under whose rule the Palestinians lived. If you want evidence for this then you will find it in the caves of Qumran.
The prophesies in the Old Testament are slightly ambiguous about this coming Messiah. He would be a warrior king, he would be a servant of God, humble, a bruised reed he would not break, such was his gentleness.

*The story of Peters confession at Ceasaria Philippi (now known as Banais, on the borders of Lebanon) is a turning point. The statues of to the Greek God Pan can still be seen there and people sit and eat their sandwiches on them.

*Jesus asks, “Who do people say that I am?” It wasn’t normal for rabbis to ask questions of their pupils but this rabbi did. He asked them to test out the water, to find out the gossip.

*And they told him, Elijah or Jeremiah, John the Baptist or a prophet returned from the dead. Then he asks them who they thought he was and immediately Peter says “The Messiah”! Its a shocking answer! Its blasphemy but he says it. They are told to keep quiet because this knowledge is dangerous. You only tell those you trust with your life such things.

*And Jesus life is in danger because of who he is. He will suffer and die, and on the third day be raised from the dead. Its fantastic. A fantasy. Its no wonder Peter intervenes only to be rebuked by Jesus and to be accused of colluding with Satan.

Peter knew and was right that Jesus was the Messiah. A point contested by most Jews to this day. What he did not know was, what that then meant would happen and at this point his perception of Messiah was wrong.

Jesus has turned from Peter to the crowd. If you want to follow me

Deny yourself-like soldiers going into battle, you must deny your own needs on behalf of the better good-however all will fail at this in the gospel stories except Jesus.

Take up your cross-a person condemned for crucifixion, had to take up his cross,a naked, public, humiliation and a deterrent. Dissidents were crucified in the Roman Empire, the lower classes and unruly elements especially in Judea, people with no rights. Jesus is challenging the hegemony of Rome.
In so doing you will-Follow me. Follow Christ.
The paradox is that to save you must lose.
Death is the ultimate threat, facing it shatters its power. Face the bear!
However all fail Jesus.
Jesus will be reviled for his commitment to save others and lose himself.
The Beast rulers of Daniel will appear to win.
But sovereignty will pass to people of God ultimately.
Posted by GreenEaster at 17:57