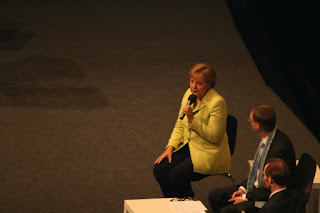 This morning I had the honour of listening to the German Chancellor Dr Angela Merkel answer questions from an audience of 7,000 in the AWD Dome in Bremen. Her entrance was spectacular. She didnt come from a side door but in from the main entrance with press photographers going in front and security and others following. She was wearing a bright green/yellow jacket which meant she stood out from the crowd and she walked determinedly. She was surrounded by flashing lights as she came to the front of the conference hall. She then sat on a Kirchentag cardboard seat to wait to be invited to the platform where she answered questions on the former East Germany, the future in Europe, Housing, on courage often making her audience laugh and joined by Professor Dr Timothy Garton Ash from Oxford. Half way through the twoo hour session she broke off to join the pianist singing "Swing Low Sweet Chariot".This was an amazing performance and she left as she had come in shaking hands along the way. Outside there was a demonstration of Ski Lankans against the killings in their home country but this did not penetrate into the conference hall.
Later today we went to the Kirchentag of ships in the Bremen harbour where tall ships, traditional sailing ships became display areas on Fair Trade or for worship services. A large industrial area along the harbour was converted into a market of Christian organisations and cafes selling their goods and advertising their services from mission, fairtrade, the environment to social justice. The weather has not been kind today with many showers and thunderstorms but promises to be better tomorrow.
Posted by GreenEaster at 18:25