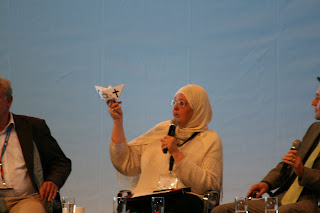 On this last day of the Kirchentag I went with about 5000 others to hear 3 theologians from different religious traditions, one Muslim, one Jewish and one Christian-a trialogue they called it. They were asked to comment on whether the thought they were all in the same boat? The trialogue began with an interruption from a comedian dressed as a local Hausfrau from Koln. She said how wonderful it was to hear these people arguingand referred to recent incidents in Hesse where there had been conflict over a religious prize which led to conflict and disagreement. She in comic form represented a conservative view and caused much hilarity. There was some disagreement about the concept of us being in the same boat. Muslims and Jews have for so long been minority religions in Germany (and of course the Holocaust is not far from peoples thoughts here). The Muslim theologian Halima Krausen from Hamburg said that she thought that we were in the same boat in terms of co-existence. The Jewish theologian said that many talked of a Hippocratic Bible the common ground of Jews, Muslims and Christians. We must recognise our difference but we must be in dialogue. Halima spoke of God giving responsibility to the Jews at first but they made a mess of it so then the responsibility passed to the Christians, they have made a mess of it so now the responsibility passes to the Muslims. But are they making a mess of it too and will it pass to another religion? She said I dont possess the truth but I hav encountered it so I have a responsibility to pass it on. A local theologian from Bremen spoke of the impetus that the 9/11 and 7/7 bombings had given to inter-faith dialogue as well as issues of national security. But it was felt that inter-faith dialogue can exist at just an academic level. So what does inter-faith dialogue have to say in a post-Christian time? Christians are not the only creation from God and this pluralism will be with us until the end of time. There are 80 million people in Germany, 25 million Roman Catholics and 25 million Protestants. The German constitution rightly upholds human dignity which Jewish, Christian and Muslim holy texts also describe. Religion is more than a fire brigade in the 21st century. We are not just a club like stamp collectors. As people of faith we are expected to join in and influence society but if Muslims do this they are often criticised. Even secular Europe is built upon Christian ideals. If we didnt have these values there would be anarchy. But it is difficult for us to live with this pluralism and especially for the majority to learn to live differently.
I wandered around the main conference area the exhibitions, stalls, the music and finally came away. Later I made a bicycle ride with my friends to an eco-farm along a dyke where there was an art exhibition from the Kirchentag. We had a celebratory meal together. This morning with thousands of others I went into the central station in Bremen to catch a train to Cologne. The train was very crowded and some people had to stand for the whole 3 hour journey. There was also a police incident so the train was late arriving at Cologne. I had to rush to catch the next train to Brussels, a Thalys train-with access to the internet!
Posted by GreenEaster at 11:22