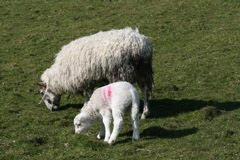 The scene begins with Jesus sitting with the tax collectors and
sinners for which he was being criticised. They were all gathering around him. Tax collectors and sinners were constantly coming to Jesus to listen to him. The Pharisses muttered and were complaining. “This man” they called him-a contemptuous way to refer to another person. He associates with sinners, and even eats with them.

Jesus did not spend his time with the respectable religious people, he spent his time with ordinary people, people who did not go to the synagogue on a Sabbath or church on a Sunday and he ate with them.  How disgusting can you get!  Pharisees of course were forbidden to eat with sinners.

He tells a story about farmhands and shepherds-again ordinary people who were however considered unclean by the religious folk of the day.
And he tells the story of the lost sheep. 100 sheep was the nomal size for a flock.  The shepherd in the story leaves 99 well behaved docile sheep to follow the naughty one who has wandered off.  What kind of a shepherd do we have here?  We would sack him! He continues the search until he finds the lost sheep. Once finding her he lays the sheep on his shoulders and plans a party with his friends.

The story tells us 2 things. Firstly the shepherd looked after his run away at the risk of losing the rest of his flock and secondly that the shepherd cared
for the lost sheep more than he cared for the others.

We move on to the next story keeping in our minds the word "lost". The lost coin in the story is equivalent to the cost of a sheep, it is the woman's life savings. This woman lives in a poor house with a low door and no windows.  She has to light a lamp to see to sweep.  She searches carefully until she
finds it.  And on finding it, she plans a party to celebrate with her
neighbours.This time not only God but the angels are rejoicing in heaven.

In Luke's gospel and for us the story has a wider meaning.  We find
the word repentence only on Jesus's lips in Luke 15v7. In Aramaic it
means returned to a rational state of mind.  Lukes stories of Jesus
find us returning again and again to those who have a change of heart;
the taxcollector who stops cheating, the rich man who stops coveting,
the conceited man who becomes humble.
Repentance is something done wholeheartedly, it is a permanent change.
It is closely linked to the word converted.  It means;

Repentance means returning to the open arms of God to experience God's
goodness.  It is not an act of human humility but it is God-driven, over whelming.
In the wake of repentance of recognising our own lostness, there will
be a coming home, dancing, rebirth, reconciliation and beyond death,
resurrection.

So I want to encourage you to let go of religious ritual, to mix with
ordinary people who are not religious as Jesus did, and to acknowledge
your own lostness  before God. In short to turn to Christ, wholeheartedly.
Posted by GreenEaster at 19:02