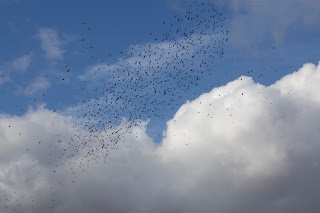 The story of the Gerasene demoniac is of a cosmic confrontation between the kingdom of God and the kingdom of Satan, a confrontation played out in the ministry of Jesus and in our lives. It follows Jesus' stilling of the storm. Both stories image the powers of darkness and the defeat of those powers.
When Jesus stepped ashore a man from the city having demons, who previously lived in the village nearby. (mental health issues?),when he saw Jesus, he began to scream out, fell at his feet (lunged at).
He said “I beg you”.“What do you want with me" Jesus replied- what to me and to you. A Semitic expression, what do we have in common.
The demons in the man recognise Jesus as the Son of the most high God.The dark powers are well aware of Jesus' divine origins.“Don't torture me” (lit. twisting) imposed by a court to extract a confession, inflict punishment. Voldemort. The man knows he has met his match.
Many times this power had seized him (epilepsy?) - though he was chained bound with chains and fetters. The people had bound him with chains and fetters to make him safe. But he had broken his chains and been driven into wilderness.
Jesus asked him "What is your name?" - This is the only record of Jesus having a conversation with demonic powers.The man answered "Legion" - The evil powers have identified who they are, but not their names. A Roman legion consisted of some 5,000 soldiers. The man had many demons-just as Mary had many. They begged him not to send them to the “Abyss" – a very deep, the underworld, dwelling place of Satan. Luke probably thinks the depths of the sea is the abyss.
There is a large herd of pigs grazing on the hillside. The demons begged him to cast them into them.
When the demons came out, the herd rushed down the cliff and drowned (the shouting?).
Those tending the pigs reported this to others as they were scared. The villagers and farming community went out to see what had happened. When they reached Jesus, they saw the man, sitting having been dressed and being of sound mind, seated at the feet of Jesus (The image here is of a disciple).
They were afraid. The scene is one of calm; the pigs gone, the man sane, and so the townsfolk are afraid!
The eyewitnesses (swine herders) told the people that the demon-possessed man was healed/saved. For Luke, a healing=salvation.
And the people asked Jesus to leave them! He left and returned to Galilee.
The man begged to go with him but he sent him away saying, “Return home to your own community. So he went away and all over the town and witnessed to his healing.
Posted by GreenEaster at 16:10