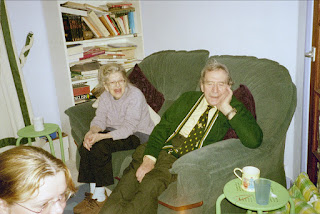 My father died last night. He was 91 and could be described as "an old soldier".
He has a form of dementia that has increasingly taken him over during the last 5 years so that now he was unrecognisable as my dad. The prognosis was not good as he has caught pneumonia after an operation to replace his hip.
I am very proud of my father. He was born to a poor Irish family in Wallasay, Merseyside in 1919. He was the second eldest of 5 children. The eldest George died in childhood so dad took over the reigns from him. His father had fought in the Great War 1914-18 and came back suffering from a form of post traumatic stress and never recovered. Sadly I never met him. My grandmother Mary was a wonderful woman, a pillar of the Irish Catholic community. Dad, or Billy as she called him was often given a sharp slap by her and was always getting into mischief, stealing apples from the priests garden and so on. He was also at that time a devout altar boy.
He left school at 11 and worked as an errand boy for a grocers and then for a hardware store. He was by now the breadwinner of the family. At 17 he shocked his mother by joining the Royal Navy and by 18 was setting sail for the world, so that by the time of the out break of the Second World War he was a professional sailor at officer status. He was a telegrapher and was on various convoys involved with mapping. During the war he was on aircraft carriers and part of the Artic Convoy enabling save passage of fleet through the Baltic. He was called up again to Chatham when I was young because of the war in Korea. He loved being in the Navy and would regale everyone with tales from that period of his life. As a small child I used to love his stories.
After leaving the Navy he worked for a while as a docker and then became a teleprinter operator with Cable and Wireless and then the Post Office. He ended his career in charge of Fleet House in Fleet Street where all the telegrams throughout the world came in and out of the country.
In retirement he busied himself with golf and doing up my grandmothers house in South London. finally selling it and rewarding himself with a second hand black Mercedes. In his 70s he decided to move nearer to my sister and I in the West Midlands and settled in Bearwood.
My memories of my dad are very rich. He taught me to love animals. We had so many animals when I grew up. First we had a dog called Scamp who kept running away and finally was given to a pub. Then we had Bonnie, a golden spaniel who we showed and dad painted her nose black in order to win a bronze prize. For a shortwhile he had a dalmation called Jason and lastly a black cocker called Sammy dog. He loved his dogs and loved to walk them and ruffle their ears. He also looked after my dog Lady when she became too much for me. We had two hamsters called Whiskey and Soda who escaped and ate the bottom of the living room curtains. We had 49 budgies in an aviary and bred pure yellow, white ones and a beautiful smokey grey one. My own was called Nicholas because I had him at Christmas and I taught him to talk and go on my train set on the kitchen floor. Then dad bought me a black and white Dutch rabbit called Thumper and a hedgehog. In between I had various sparrows and thrushes that I found on the way home from school. One called Spadge dad let out when I was on a school holiday presumably because he thought it was cruel to keep him. So dad taught me to love animals.
He also taught me how to draw, paint and make things especially from wood and papier mache. He had a workshop in our down stairs flat in South London and used to give me pieces of wood to carve with. We made models together of boats and for some reason we made loads of minuture gliders.
And he taught me to ride a bike. Having had a rusty bike I learnt on he bought me a spanking new one for my birthday.
When I was 11 and passed the 11plus he gave me a letter with a £10 in it. While I was a teenager he was a strict dad, preventing me from going to the 100 Club when I was 17. Quite rightly!
On arrival of grandchildren he enjoyed making a sandpit for my eldest daughter and saving cartoon videos for my youngest daughter to watch when she got up early.
He was a generous person but taught me to stand on my own two feet. His favourite poem was "If" by Rudyard Kipling. It was difficult to see him struggle after he was stopped from driving and in many ways this signaled his decline.

I am very proud of my father and what he achieved and am glad he is now at peace.
Posted by GreenEaster at 21:16