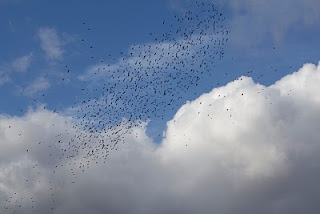 Peter's confession at Caesarea Philippi, along with Jesus' first prediction of his death and resurrection and teaching on cross-bearing discipleship is followed some eight days later by Jesus' transfiguration.

It was difficult even then to pray in the middle of the city so they went to a quieter place. As Jesus was praying there was a bright light like a flash of lightening, a dazzling white . The white robes remind us of the white robes of the martyrs in the Book of Revelation and of course of angels. There were also two men as at Jesus' resurrection. The arrival of Moses and Elijah, sanctions Christ as the fulfillment of the Law and the Prophets but if you or I had been present we may have found it all terrifying or unbelievable.

The disciples were very sleepy- this was a long meeting! When they woke up they share in the experience. We find the connection with this half-waking sleeping state and visions. As the shiny men were leaving, Peter wanted to preserve the moment with the building of three shelters or booths (like the feast of Tabernacles). The shelters, tents, tabernacles add to the Exodus theme. Peter's fear led to his desire to preserve the glory of the moment. His words broke the moment and a cloud enveloped them like the cloud covering the tabernacle in Exodus and they were afraid as they entered it. The words are heard “This is my son- whom I have chosen listen to him”, also the words at Jesus' baptism. Suddenly Jesus was alone. They are pointed to the experience of the cross, and suffering which is the traditional lot of prophets. The journey to Jerusalem continues, amid its dust and chaos and the disciples kept this to themselves- were silent.

Two Old Testament motifs are used to draw out the significance of the transfiguration:
i) The Son of man in Daniel (Dan.10:8f);
ii)The Exodus, the theophany on Mount Sinai (Ex.13:20f). Moses encountered God after 40 days of fasting and praying and his face shone. Prayer is often linked to transformation. There are those who tell me that they can see auras around people which tell you about them, their spiritual disposition their state of health. Some painters would depict people especially holy people with such auras. El Greco for example. It is not impossible to believe that Christ received such an input of divine energy that he shone.

In my experience it is rare to do more than catch a glimpse of God. It may be that some of us are lucky enough to have such a mountain experience and it will show in our faces. What is certain is that it will pass and we will once more be faced with the demands of the city-real life. This small group had gone away to pray. The practice of prayer does not guarantee such an experience although strange things may happen to us on the way to prayer. We may be transformed. And this may encourage us on our journey.
Posted by GreenEaster at 19:02