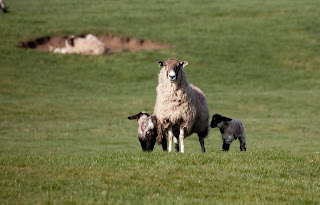 The theme of the passage for this week in Lent is that Jesus is the Good Shepherd of the sheep. It follows on from Jesus' visit to Jerusalem for the Feast of Tabernacles where he is revealed as the light of the world, a light that brings life. This light shines in the darkness, and some begin to see and find life. Others reject the light. The chapter moves forward in seven stages, where the blind man, not only sees, but grows in his understanding of the one who gave him sight. This passage focuses on spiritual sight and spiritual blindness. The man's blindness from birth underlines the seriousness of the condition and also stifles the argument that the man's condition is a consequence of sin. Exodus 20:5 encouraged the notion that the stain of a parent's sin may infect a child, but the book of Job makes it clear that there is no direct correlation between a particular sin and sickness.The man's blindness provides an opportunity for Jesus to be the light of the world. It had nothing to do with his or his parent's sin.
Jesus spat! It was commonly held that saliva had curative powers, but its use was later banned in Jewish circles due to its use in the magical arts. Saliva, as with dirt, implied ritual impurity and that Jesus here is defying Jewish sensibilities and healing independently of the prevailing notions of ritual cleanliness.  Furthermore Jesus does this on the Sabbath. This  may be a direct challenge to Jewish religious sensibilities.The pool of Siloam was the diverted waters from the spring of Gihon that flowed through Hezekiah's tunnel. It is most likely the lower pool.
The man who was healed was a beggar who used to sit and beg. He was asked "How is it that you now see?" He answered that "the man they call Jesus smeared spit on my eyes. I went and having washed, I saw". The interrogation of the blind man by the Pharisees. And they insisted that he come with them to see the religious authorities. Jesus made the clay and restored his sight on a Sabbath day. So the Pharisees say that he is not from God because he didnt respect the Sabbath law (Deut.13:1-5).  Jesus should have waited till the first day of the week to perform the healing, since the man's condition was not life threatening. And so they were divided - violently about Jesus. The man who was healed however, thinks Jesus is a prophet, a special person who is a man of God. So the Pharisees then interrogate his parents, without their blind son being present. They said that they didnt know how he got his sight or who gave it to him but he is of age so ask him, because they were afraid of the religious authorities. How many parallels are there today with people being afraid of religious institutions and their power?

The Jews agreed together to excommunicate Jesus because he has healed the man, the greater good being ignored.  John is referring to a total excommunication of believers from Israel, a banishment. The former blind man is further interrogated by the Pharisees and they hurled insults at him because they are disciples of Moses and Moses is the only source of the Law.
Jesus went and found the man and talked to him. The divisive nature of the revelation has as its purpose the drawing out of those who seek the light. Goodness is not recognized for what it is unless understood in the narrow confines of religious teaching. But God does not work like that in the real world!
Posted by GreenEaster at 20:13