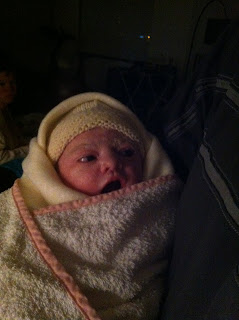 This is my third granddaughter born in Sidney on Friday morning, my sixth grandchild! I never thought I would have so many grandchildren and it makes me reflect on my own grandmas and the role of a grandma.

When I was born I had two grandmas, one I never saw and one I loved to bits who became a role model for me my whole life long. The grandmother I hardly remember was a small jolly Irish woman, Mary Davison from the Border Country in Northern Ireland. She had red curly hair and was small. She had 6 children, my dad being the second eldest boy and was the breadwinner of the household for most of her life. She lived and died in Wallasey, Cheshire. I didnt know her because I was born in London and she seldom came to stay. I wish I had really known her.

My other grandmother Lillian Davies was born at the end of the nineteenth century. She was brought up in a boarding house in Ramsgate and had two children by a wealthy Jewish French educationalist. They never married and my grandmother eventually married a professional gambler, lived in Hampstead Heath and lost him to TB. This grandmother worked all her life particularly, as a manageress at Express Dairies, South Kensington until her son gave her enough money to stay at home. She had many male admirers and gifts from all over the world. I stayed with her as a young child and loved being with her and my great uncles who lived with her. When I stayed overnight  I was nearly lost in her large double bed and there was a picture of sheep in a field on the wall that sent me to sleep. I remember vividly her canary, watching the wrestling and playing with her button box and kitchen scales. She kept beautiful cotton handkerchiefs which were always her parting gift. She gave me a grounding in common sense and fun! As I grew older on a Sunday I used to cycle to my grandmas from Norbury to West Norwood and as well as having an early Sunday dinner I was given a port to drink! My favourite picture of her was of her consuming a Guinness at Epsom at the Derby.  My grandma was my friend as well as my gran. She was a strong beautiful woman and I am proud to be her granddaughter.