Most people think this passage is about whether we should pay taxes. Its recorded in all the Synoptic gospels and the Gospel of Thomas. But did Jesus really mean they should financially support Tiberius Caesar – a pedophile and murderer an oppressive emperor who enslaved millions?

In 6 A.D., Roman occupiers of Palestine imposed a tax on the Jews. In 17 A.D Tacitus reports that the provinces of Syria and Judaea begged for a reduction of the tribute. There followed a tax revolt led by Judas the Galilean, who recognised only God's authority over Israel. The Romans responded brutally for decades.

The undercurrent of this situation underpinned Jesus’ ministry. All the three synoptic Gospels put this story immediately after Jesus’ triumphal entry into Jerusalem. All three place the story near Passover. Passover remembers the Israelites deliverance from Egypt to the promised land which at the time of the story was occupied by the Romans. Thousands of Jews were in Jerusalem for Passover.

Pontius Pilate, the Roman procurator of Judea, was temporarily in Jerusalem to oversee affairs and stop political revolt. Pilate was a cruel and angry man. A few years before Jesus’ ministry, the images of Caesar nearly caused a riot in Jerusalem, when Pilate one night, erected effigies of the emperor on the fortress Antonia, adjoining the Jewish Temple. Jewish law forbad the creation of graven images and their introduction into holy city of Jerusalem. Pilate averted a bloodbath only by removing the images.
It is against this background that this story is told.

The question is designed to trap Jesus on this issue. It was a question of religious law but the Pharisees believed that only they could interpret Jewish law. They are trying to force Jesus to answer the question. If he doesnt answer he will lose credibility as a teacher.
The question is whether it is lawful under the Torah to pay taxes to the Romans.
If Jesus said it was lawful he would be seen as a collaborator with the Roman occupiers. If Jesus says that the tribute is unlawful he would be seen as a terrorist either way he would be killed!

Jesus sees the trap. He asked to see the coin, a denarius. It was worth a days wage for a labourer. The denarius gave financial stability. The denarius Jesus saw was issued by Tiberius, whose reign coincided with Jesus’ ministry. He issued three in his life time.  The third produced by his own mint paid his soldiers, officials, and suppliers and carried the imperial seal. It was used to pay the tribute.

Tiberius’ denarii were minted in France at Lugdunum, Lyons, in Gaul. Its circulation in Judaea was scarce. The only people using it were soldiers, Roman officials, and Jewish leaders. The questioners’ produce the coin quickly.  This all took place in the Temple. It was a pagan symbol in a sacred space.

Jesus threw a counter-question, "Whose image and inscription is this?" They answered the Emperor. 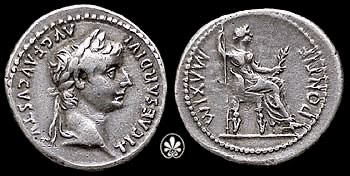 In the Torah, everything belonged to God. By using the words, "image and inscription," Jesus reminded them that only God was owed allegiance and worship. Everything, even economics belonged to God.

The emperor claimed that all people and things in the empire  belonged to Rome. The denarius indicated that the emperor demanded exclusive allegiance and Tiberius claimed to be the son of a god. The Roman occupation reminded everyone that Israel belonged to Rome and its economic life depended on the emperor.

Jesus has shown that the claims of God and Caesar are mutually exclusive. If your faith is in God, then God is owed everything. Jesus’ response is politically seditious. His listeners knew what he was saying.

"Render unto Caesar the things that are Caesar’s," means that the emperor is owed nothing.