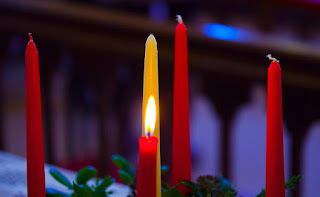 The story of the angel Gabriel coming to Zechariah speaks of preparation for such a deliverance through the birth of a baby, who will be a prophet. Someone who will begin to build the upside down kingdom and restore values to society. John the Baptist was someone who would be set aside to speak truth into a society that had lost its way. He would turn people back to God and restore families. Hope to the Hopeless! And its starts with an old man, a good man who served God faithfully.

John's preparation for the coming of  Jesus consists of a call to repentance, that is a turning away from that which was destructive to embrace that which was just. John spoke out against what was wrong and corrupt in his society and as a result was imprisoned and finally killed.

In our daily lives we are called to stand for what is right and it is not an easy task. In fact throughout the world many are in prison as John was, for speaking out for what is right. John's call for repentance or change not only is a call on our lives as individuals but our life as a society. As a nation we need to change.

Part of that preparation means recognising that all is not well in our own lives and in the lives of those around us. There must be justice for those who are currently suffering and this means speaking out as John did.

How many of us have given up hope. We have stopped praying for miracles, for healing both physical and emotional, for change. How many of us face seemingly difficult and hopeless situations at this Advent time? Situations that perhaps only you know of, and yet the message of God to us is one of hope whatever our situation.

Hope comes to us in unexpected ways, when we least expect it, in a dream, or in a moment of inspiration, through a friend, or even someone we dislike. God uses surprising people as a vehicle of hope. We may feel the presence of God suddenly, feel peace and strength and realize that God is with us in all things and especially in the crisis we face.

There can be nothing better than to hear words of hope. An infertility broken. A diagnosis wrong. A wrong forgiven. A brokenness mended. New possibilities imagined. Hope of a better world, hope of peace between Muslim and Christian, in Syria, in Afghanistan, in Chechnya. Hope born of years in prison, or of a death for a dream. Of such things others have much to teach us.

So this Advent as we turn in the journey of our own lives to embrace a possibility, a time of hope, as we not only enjoy Christmas but spiritually feed on this potentiality, for this is the true meaning of Christmas. The Christmas festival is symbolised by light, a light shining in darkness. The story of the coming of the birth of a baby is a vehicle, a carrier of hope for us all to feed our spirits and our imaginations. For the Jews this waiting continues, waiting for the Messiah.

For many of us we need to feel the brush of angels wings and the whisper of hope this Advent, this waiting time. Today this message challenges us to live lives according to gospel values rather than those of the consumer capitalism that surrounds us. God given hope is not optimism, or sentimentality, based on ignorance or naivite. It is based quite simply on a trust in God. The God who brings light into darkness.