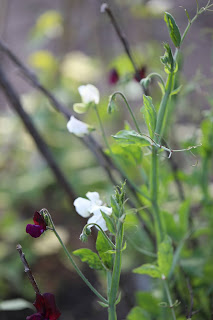 There are two types of parables: there are teaching parables and there are kingdom parables. The kingdom parables usually begin with  "The kingdom of God/heaven". Matthew chapter 13 consists of kingdom parables and Jesus' words in v10-17 are about these kind of parables. They teach the presentness of the kingdom and its immediacy. In the Old Testament they are, in Hebrew, a masal, an obscure saying or riddle. So Jesus tells parables about weeds and wheat, mustard seeds, yeast. Even the disciples were unable to understand the meaning of these riddles.
When the poor Palestinian farmer went out to sow his seed, he did so in a kind of mindless fashion, chucking it into small corners of rocks and crevices, in poor soil, amongst weeds and finally some was thrown on good soil. Indeed it would seem he did so not heeding the consequences of his actions. He went out to sow seed, in the field, on the paths, on rocks among thorns  whether birds were present or not. The implication seems to be that we should also be sowing the gospel, the good seed everywhere we not just where we would expect it to grow, certainly not just in church buildings or church meetings but at he shops, on the bus, in the pub, the club, at the school gate, in the office, at the football match. Its not our problem to worry about the yield. Our job is just to sow. Like the mustard seed large plants can grow from small beginnings.
Other parables however talk about the yield of the sowing, the harvest. And the responsibility for the harvest seems to rely on the person who has received the good news, the seed, the Word of God. In the parable of the talents the man who multiplied what had been given to him is praised while the one who hides it away is condemned. Like yeast Gods gifts just go moldy if not mixed with flour and multiplied. Like salt it is useless unless used as a flavouring for a meal. The harvest of the good seed, the gospel/the good news is our responsibility. You cannot keep it to yourself or it will go bad within you and be useless. It needs to be shared. Unless the churches share the gospel and reap a harvest they will go moldy and die.
We forget that it is God that gives the growth, that our role is simply to sow the seed, to sow it lovingly, lavishly, generously.
The seeds we are called to sow are seeds of hope, faith, and love
We can never tell how the seed will fall or where it might take root. Our job is to plant the seeds and trust God to give the growth.
We are not the seed. The seed is the Word of God, which grows in us. We will not necessarily see the fruits of our labour but we are called to be faithful, (not necessarily successful) in the sowing.
Jesus begins and ends the parable of the sower with a command to listen.
We have all sown the gospel. Some of it has produced good growth/good harvest like flowers and vegetables in your garden. Some has produced bad fruit. What you have sown this year?
In our nation we have sown division. A fear of migrants and their descendants on whom our economy, our NHS depends; We have sown racism..We have sown division between the rich and the poor. And so we have increasingly divided communities. We have allowed destructive ideologies to flourish even in our own back yards and in our governments and we have nurtured ideologies of hatred and created a world where the poor have knowledge of material wellbeing but cannot grasp it for themselves. We have sown destruction of our environment. But we are called to sow Gods Word. The gospel. Salvation. Shalom.
The gospel is uncomfortable even shocking. It forces us to go places we don’t want to go,  the rocky soil. But we have a heavenly mandate. We are not tied down by ordinary human prejudices or the behaviour of people around us. We are called to move out to those on the edge because we are called to sow and harvest love even though this is no easy task. That is our calling. Just go and sow God, everywhere!
Posted by GreenEaster at 09:12