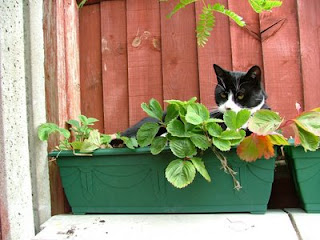 There is a famous vine at Hampton Court and my mother used to work for the Chief Architect of the Department of Environment. She asked him for a cutting. It arrived in a pot with ER on the outside. It flowered bur never produced grapes and when they moved house my father dug it up and it didn’t survive the trauma.
My mothers Great Uncle went to Australia with 15/- as a teenager. Through hard work he became a peach farmer and eventually an ambassador for the Australian government. He visited England in the 1920s and was given a cutting of the Hampton Court vine. Unlike my father he cultivated it successfully to become an enormous vine on his peach farm.

I have a vine in my garden. I asked my mum to buy it for my birthday in September to celebrate my new garden. It had a few dry shoots that I pruned and because I hate wasting things I put them in the ground. That was in the Autumn so I forgot all about it until about 6 weeks later. I was puzzled because the vine had no leaves, so I started watering it, every day! At the Farmers Market our Churches Together stall was next to the Halfpenny Green Vineyard one, so I asked their advice-Weather was the answer. Everything was late because of the long cold Spring. Keep it sheltered and well drained until the temperature warms up. By the next months Farmers Market not only was the Vine beginning to sprout but to my amazement so were the cuttings and despite dreadful soil conditions (my garden has no real soil just coaldust and rubble-and my mother thinks its contaminated with arsenic!)

I am a new gardener but even I know the importance of looking after my plants. First it has to have the correct soil not too acid or too alkaline. Then it has to be adjusted depending on whether its sandy or clay by adding loam, compost and manure. Then you have to plant it in the right place in sun or shade and give the water it needs but not too much. If I don’t prune my fruit trees they would grow wild and bear little poor fruit.

Jesus in John's 15 likens himself to the True Vine! A surprise perhaps. God is the Vinegrower, like the chap at Halfpenny Green. Even Jesus has branches removed that are not bearing fruit and like me with my vine, cherry, apple and apricot trees the fruit bearing branches are pruned so they grow fewer but better fruit. By hearing Jesus the passage says we have started to be pruned. Then he has a kind of symbiotic picture. He lives in us and we in him. We are like branches of the main vine and we cannot exist apart from it. In fact pruned branches are usually discarded.

Furthermore if we have that symbiosis and are aware of Gods presence in our lives, then we will know what is of God and we are promised that God will bless us, because if we do this we will be true disciples of Jesus. The main ingredient of this symbiosis, this sap, is of course Gods love and how do we know what is Gods love? It is shown through Jesus commandments which he asks us to keep. According to Jesus it is summed up in loving God and loving our neighbour as ourself-and the fruit we bear is joy!

It all sounds very easy doesn’t it! But its a paradox that at the worst and most busy times we must spend more time with God. If we don’t we will end up in a dizzy mess. Its much easier to say it than do it though!
Posted by GreenEaster at 21:32