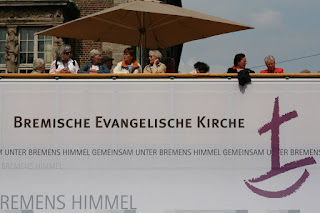 I left Rowley Regis in Sandwell early this morning to go to St Pancras by London Midland with the help of Virgin Trains. Then I took Eurostar to Brussels. Now Im on a busy international Thalys train from Brussels to Koln where I actually have WiFi access. Super. Ive discovered my Orange mobile doesnt seem to have European compatability so the internet access is great. Its cool and grey here much like at home when I left. All the trains have so far have been on time. I met a guy called Paul who is a data monitoring person with YMCA training and thought there was a lot of connections with our work at bcuim and in Dudley with regard to training and apprenticeships. David Owen(chair of bcuim and of Rubery Owen) was also on my first train but in First Class on business! France and Belgium seem very similar to much of the West Midlands so far except that the inspector on this train was also checking passports. My cross set off security at St Pancras going through passport control.
Posted by GreenEaster at 14:38