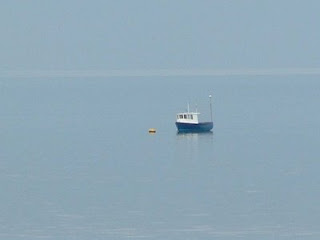 From his throne on the shore at Bosham, Sussex, Canute, the 11th-century Danish king of England, commanded the sea: "You are subject to me, as the land on which I am sitting is mine, and no one has resisted my overlordship with impunity. I command you, therefore, not to rise on my land, nor to presume to wet the clothing or the limbs of your master." And he got wet!
With climate change storms are likely to increase and the biggest threat is to the coastal areas of Britain and tidal esturies like the Thames, Severn and so on. The Storm Tide Forecasting Service, a joint project of the Met Office and the Proudman Oceanographic Laboratory in Liverpool, uses computer models to warn of storm surges up to 48 hours in advance. The Environment Agency's flood control centre at the Thames Barrier then notifies its regional command posts, which send out automated voice warnings. Part of the Environment Agency present strategy is to allow 500 acres a year to become salt marshes. At places like Freiston, in Lincolnshire the sea walls are being breached and in the twenty first century like Canute we can't control the seas.
This section of Marks gospel is about confronting destructive powers. The wild sea is like the the wild demoniac in the next story, Jesus brings calm to both. In the first century evil powers were thought to reside in the ocean.
It was evening, sunset and Jesus and his disciples crossed over to the east of Lake Galilee.
There was a fierce gust of wind and the waves were breaking into the boat, like a bad journey from Iona to Staffa perhaps! The boat was swamped and it was about to sink. Jesus was in the back of the boat with his head on a pillow, possibly a rowers leather seat cushion, of which there would be more than one. The disciples woke him up. Don't you care that we are all about to drown? Hurry! Do something! He got up having been woken out of a deep sleep and rebuked the wind. The wind dropped and it was calm. Why are you afraid like this he asked? They were terrified.
Maybe this says something to us about climate change. It is something to be fearful of and can destroy us, but we have the knowledge and power to prevent it doing that. We just need to apply it.
Posted by GreenEaster at 19:59