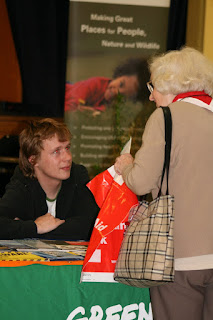 I have a friend who decided not to fly for a year. A year later he was at a meal with some friends who had bought and done up a villa in Italy. "You must come and stay with us they said. When would you like to come? We will buy you a plane ticket". Then the penny dropped. You are not doing that nonense of not flying again are you! And they had a row! My friend eventually went out to the villa-sometime later by train!

In this part of Marks gospel there is growing discontent. Jesus has left Capernaum to preach in the villages of Galilee and begins twenty-five miles away in his native country of Nazareth. At first his teaching in the synagogue astounds them but they cannot forget that this rabbi, whose now famous throughout Galilee had grown up with them and was a carpenter like his father. There is a shift of mood as Jesus' ministry begins to bite.
Jesus left his hometown Nazareth, where he grew up, with a group of disciples. When the Sabbath came he began to teach. In the early part of Jesus' ministry he was able to attend the local synagogue and, as a visiting rabbi, was invited to speak. The majority were amazed-amazement being is a key response in Mark. This amazement quickly becomes rejection and unbelief. They become scandalised by his teaching. "Where did this man get these things? Does his wisdom and miracles come from God or Satan?"
The reference to Jesus brothers and sisters is a serious challenge to any notions of Mary's perpetual virginity and the reference to Jesus as the carpenter-builder gives the background to his illusions to the building trade, building a tower, a house, a plum-bob.
The designation "Mary's son" is derogatory alluding to his illegitimacy and a murky pedegree. Jesus would normally be "Joseph's son" even if his father were dead. So they took refused to believe in him and his teaching. "A prophet is not without honor except in his own country."
Would you accept someone you knew from childhood telling you how to live your life!
So the gospel and miracles were no longer generally available to them. Even he had limitations and could not do anything there except heal a few people by laying hands on them. He was amazed at their lack of faith. So he went around teaching from village to village.
And because it was so difficult to do anything there...he called twelve of his inner circle of disciples and sent them out in pairs to tell the good news, taking a walking stick, no bread, no bag, and no money in their pockets. "Wear sandals, but only take only the clothes you are wearing", he told them."When you enter a house, stay there until you leave that town.
If the people in a certain place refuse to welcome you or listen to you, leave that place. Shake its dust off your feet as a warning to them.
So the disciples went out and preached so that people should change their hearts and lives.They forced many demons out and put olive oil on many sick people and healed them.
Posted by GreenEaster at 13:27