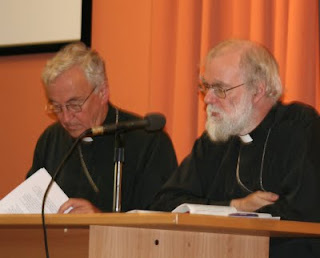 I spent 3 days with 2 Archbishops this week Well you'd think that would be boring but it wasnt! The Forum is organised by CTE (Churches Together in England) as is the most inclusive Christian gathering of churches that takes place. Having said that there were notable absences. Im sure the Black Churches were under represented and there were no Chinese or Korean churches but... We were welcomed with a lecture on the roots of our fragmentation given by David Cornick (CTE General Secretary). It reminded me of why it is so difficult for us to work together because we have this fragmented historical foundation. Our main work was done in sub-group which reflected the denomination diversity. In mine we had a dynamic black woman bishop from South London who spends a lot of time mentoring black kids and had a team ministry that she oversaw. Previously a civil servant she brought charisma and energy as well as real management skills to her role.
Also in my gropup was a real"Lady" although you wouldnt have guessed it(I dont know if she lived in a stately home but she had a secretary because she didnt like email). There were Americans, Quakers, Catholics, Methodists, URC, Baptists and even the odd Anglican who were very thin on the ground. In the evening we were given 4 snapshots of the different sorts of work Christians were engaged in including Street Pastors in Birmingham, Young peoples work in Little Dean, Climate Change work in Cumbria, and reconcilliation work with Muslims after the riots in Burnley.
On Tuesday we had an hour lecture from Fr Timothy Radcliffe a Dominican who reminded me that we cannot box our Christianity into neat simplistic boxes even if thats what others want us to do. Messy theology! This was followed by an amazing exposition of I Corinthians by Rowan Williams who didnt have a note and worked from the original Greek! Vincent Nicholls chipped in too. The worship on Tuesday was punctuated by a visual presentation from Sue Wallace of Visions at York and some beautiful music from a quintet.
Posted by GreenEaster at 16:03