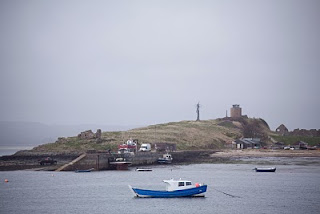 It happened this way. Some of the disciples are returning to their normal duties after the death of Jesus, to fishing, perhaps in desperation, this meaning intensified  by the fact we are told that they catch nothing that night.
Thomas was there, Didymus is the Greek word for the Hebrew "Thomas", both of which mean "twin". and the sons of Zebedee. John has not mentioned the brothers, James and John, before.
Peter announced I am going to fish. So they went out leaving the house they were staying at in Capernaum, possibly Peter's house. the boat-this is the boat that the disciples used for fishing, possibly owned by one or two of them. Possibly even the boat that nearly sunk two years before when weighed down with a haul of fish.

It was early in the morning, when dawn was already breaking when they were cominmg back and they saw Jesus on the shore but they did not realize initially that it was Jesus.“You haven't caught any fish have you? He said.
“Throw to the right side of the boat." And they did and this time they were not strong enough to haul the catch of fish.
John realizes the man on the shore is Jesus and Peter on realising this, he wrapped [his outer garment around him, tucks up his working/fisherman's smock, under his belt before diving into the water, because to offer a greeting naked would be bad manners. We may assume that Peter had mixed emotions in this encounter with Jesus. He had denied any knowledge of him, 3 times.

The 153  fish were big, there were a lot of them, and none got away.
Much has and can be made of the symbolic significance of the number of fish caught, 153, especially if you are a mathematician and we know that the symbolism of the fish in early Christianity is very widespread. The story also recalls for us Luke 5(the big catch). Peter  climbed aboard to haul the net ashore.

Jewish hosts always said a blessing at the beginning of a meal. Jesus is therefore following the norm when he blesses the food. Of course as in all the resurrection appearances there are eucharistic overtones and we remember that most of them take place within the context of eating together. There may be a profound truth here that Jesus is always potentially to be found as we eat together.
Jesus takes the food and distributes it, alluding to the last supper, the appearance at Cleopas house and the feeding of the 5,000.

We are told this is the third time that Jesus appeared after he was raised from the dead, but this seems to ignores Jesus' appearance to Mary (because she is a woman? Even today we find that woman are discounted as legal witnesses.)and  it reads as if it were a first time appearance.

So we have a ghost with a gaping hole that you can feel, a ghost who makes a breakfast barbecue. Or maybe it's just a story, a comfortable way of resolving grief.

Peters freedom will be curtailed in the future and he is further told “Follow me”.

So what do we make of this?

We can do one of three things;

1.Discount it as a piece of fabricated nonsense

2.See it allegorically as meaning that Christ is with us everywhere

3.See it as an attempt to restore the importance of Peter to the early
church by adding to the gospel, later.

4.See it as an accurate rendering of a strange happening, another
resurrection appearance that proved Jesus victory over death.

The choice is ours!
Posted by GreenEaster at 18:03