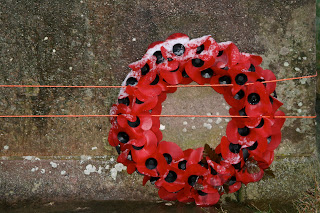 Remembrance Sunday makes me cry very easily. I found myself starting to weep in the service I did on Sunday morning. Its because it reminds me of the utter destruction of the two World Wars and the impact on my family. My mothers brother Ronnie who she loved adored was in the royal artillary and he was killed towards the end of the II World War. My mother and grandmother had to journey to France to deal with the paper work and the war was still going on. He was a very bright person and was due to go to Oxfor when the war ended. I dont think my mother has ever got over this loss and I would have loved to have met him. I have his Zeiss Ikon camera which was top notch in the 30s and 40s.

In my dads family his father George came back from the I World War with shell shock and I consequently never met him because he lived out his years in a psychiatric hospital tending the gardens. My father and his brothers Arthur and Bob went into the Navy. Dad had enlisted in the Royal Navy before the outbreak of war, in 1937. he worked his way up the ranks ending his career as an officer. He served initially on mapping operations in Canada and then went all round the world including Russia, India and North America on destroyers and aircraft carriers. He was awarded the Arctic Cross for his role in the Arctic convoy. When I was very young he was called up again for South Korea but didnt leave the country this time and was based in Chatham barracks.

But the wars took out two whole generation of men and  left those that survived with terrible memories. I had a friend at school whose father was captured by the Japanese and he had terrible nightmares. My first infant school teacher and the mother of one of my friends in primary school had served in the French resistance.

The war killed my maternal grandma Kennett who didnt survive the doodle bugs and had moved from Ramsgate to West Norwood to be with my grandmother Lillian and was then moved to Kent to stay with her daughter Betty.

I think the loss had a serious impact on my generation who grew up in the austere '50s.

But we must listen closely when we hear our Saviour speak
Of loving our worst enemies and the turning of the cheek
And if we think it can't be done, remember that our Lord
He came with neither bomb nor gun, he came without a sword.
Posted by GreenEaster at 20:11