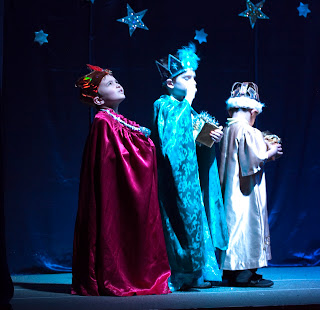 The wise men in our story in Matthew are astrologers. Now there is a strong Christian tradition that would see such people as suspect. But here they are these astrologers from theEast, traditionally thought to be Persian, through their stargazing , making  a long and
dangerous journey to find the reason for this large star. Controversially they
believed that the star depicted the birth of the King of the Jews. And they went to the palace to find the king-because kings live in palaces. But jealousy and rivalry are as old as the hills and so Herod is troubled greatly by the arrival of the magi, the magicians from the East. But he pretends that he is interested and encourages them on their way to Bethlehem, the House of Bread, to where the prophet Micah has foretold that the Messiah will come from.

And so they hurry off on their camels to Bethlehem and on arrival give the baby now an infant,  gifts of gold, frankincense and myrrh and pay homage to him. Myrrh for a kings anointing, gold symbolizing costly worship and incense prayer. And they departed another way having been warned in a dream of impending trouble if they went back to Herod. The importance of dreams in the gospel stories of the nativity are striking. Do we take notice of our dreams?

Back to the wise men. Where would we find such wisemen today? In churches? They were so convinced by their astrology that they non-Jews, went to find the star and the baby born to be the Jewish Messiah. To do so they had to physically travel, mentally adjust to cross cultural differences and religiously adopt another set of beliefs or at least some of them. They had to journey. They had to leave behind the safety of their homes, their occupations, and in great danger follow their hunch. In doing so they also willingly gave materially such was their devotion and so they gave expensive gifts to the new king. And lastly they listened to
their dreams.

There will be no real lasting satisfaction for you and for me this coming year in resolutions not fired with real desire, with a divine spark, unless we listen first to our dreams and follow our hunches, foolishly following the God of Truth and Wisdom. It may involve upheaval, it may involve a change of attitudes. It may involve traveling. It may involve, if temporarily, a leaving behind and possibly unknown dangers and the giving of what is costly. But of such stuff are dreams made of and of such stuff is the journey as Christians we embark on when we decide to truly follow the Light of all Lights.

The Epiphany story continues through dark days with murder. The murder of innocent children because of jealousy. And Joseph and Mary take seriously their dreams, so they avoid that murder. God's plan will not be thwarted by evil. They flee to Egypt and become refugees, eventually returning to Nazareth to their home and still living in the shadow of political opposition in Judea.

As God works around us this year it will be with the same mix of divine intervention, danger and tragedy. At which point we are may vary. But be sure that God will be at work despite everything. How we respond depends on the risks we are prepared to take and whether or not we listen to our dreams.