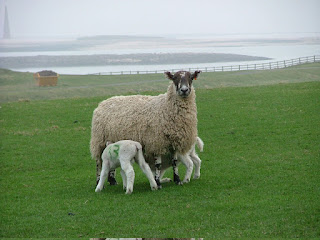 The Scribes and Pharisees grumble because Jesus is eating with sinners, in other words the ordinary people the hamarez the people of the land. Tax collectors were seen as collaborators with the Romans, while the term "sinners" was used for those who do not keep the Levitical law ie most people.

This is a story of a man who lost both sons. Although the selfishness of the older brother is less obvious than the younger son, he could not empathise with his father's joys and sorrows. So here is a story of two lost sons. Only one is found and experiences the father's joy.
A younger son said to his father give me my share of the estate so he divided the property. It would be unusual to divide an estate between the sons before the father's death, but it is only a story. It is, of course, possible that the son is taking a share of the family property (one third) and so foregoing his inheritance. The parable illustrates the father's generosity and leaves us wondering whether the younger son will show himself worthy of the father's trust. The root meaning of property is life, but here the word is being used in the sense of means of family income, that which gives life to the family.

After a few days later the younger son went on a journey to a distant country.  He squandered his inheritence in wild, reckless, and loose living. After he had spent everything he began to needy so he hired himself out to feed pigs. To fill his stomach, he ate pods possibly St. John's Bread, a sweet meal, but with little nourishment, or the wild carob, bitter with even less nourishment. These were used for famine food, or possibly corn cobs. No one gave him anything. When he came to his senses and had no food he decided to return to his father.
So he got up and went home. While he was still a long way off, his father saw him and was filled with compassion and he ran, threw his arms around him and hugged him. He put on him the best robe, possibly the son's former robe or one of the father's robes, or a robe kept for an honored guest- a ring, possibly the father's signet ring, but at least a ring whereby the father bestows authority on his wayward son, sandals. The mention of sandals is somewhat strange, but, given that servants tend not to wear anything on their feet, the parable is probably making the point that the father is not treating his son as a servant. The fattened calf was killed. Meat was only prepared for extremely important (usually religious) occasions. This is about preparing a banquet in celebration for the lost son's return to the family.

Meanwhile his older brother in the fields when he came near to the house on his way home, heard music and dancing. So he called one of the workers he asked what the commotion was all about. They told him and the brother got very angry. He is angry with the father welcoming back his waistral son, and possibly that he is about to commit usufruct, so the property that belongs to the older son is given to the younger son. He refused to go in so his father went out and pleaded with him to share the joy of his brother's restoration.
The elder brother is offended by the fuss made of the wayward brother, particularly as the elder brother regards himself as a faithful son and yet his father never gave him a feast and speaks of "this son of yours" - The language distances the elder brother from his brother who in his opinion is beyond redemption.

The father calls his son - my child. The words here describe an affectionate, but offended response by the father. How could the elder son think that mercy toward the wayward son has in any way affected the standing of the elder son? The father said "You are always with me. Everything I have is yours - everything of mine is yours". The elder brother's status is unchanged by the father's welcome of the wayward son. I thought your brother was dead - and he's alive. I thought he was lost - and he is found.

In Luke 15 the theme is lostness. The first two parables teach that being lost and found makes God very happy. In the third parable, the parable of the Lost Son or the Prodigal Son, Jesus makes the same point, but in this parable the focus shifts from the tax collectors and sinners to the Pharisees and scribes, those who have, for all these years been working like a slave for you, and never disobeyed your command-its about a heart attitude. The parable invites the religious not to be self satisfied but preoccupied by those who are lost and return to the fold.