From his throne on the shore at Bosham, Sussex, Canute, the 11th-century Danish king of England, addressed the sea: "You are subject to me, as the land on which I am sitting is mine, and no one has resisted my overlordship with impunity. I command you, therefore, not to rise on my land, nor to presume to wet the clothing or the limbs of your master." 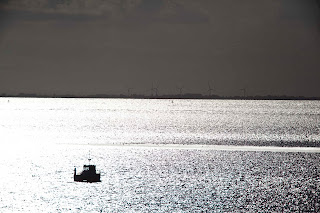 His feet got wet! Even in the 21st century, we can't command the seas.
In this story the disciples and Jesus are leaving the crowd on the beach where they had been standing while Jesus had been using the stern of the boat to speak to them. They get in the boat and are going to the east side of the lake.
A storm picks up (Galillee is like a wind tunnel), and it starts to whip up the sea and the boat is filling with water. The disciples wake Jesus up because he is asleep on a leather cushion in the back of the boat. Dont you know we are drowning they shouted. They were panicking.
Jesus sternly commands the storm to be stilled, to pipe down (its the same word he uses when confronting the evil spirit). He asks them why are they so afraid!. Dont you even yet have faith! he says. There is then this incredible calm.
The story is about confronting the powers, as is the next story in the gospels. At that time they believed that destructive powers were in the sea. And Jesus called the lake the sea. Jesus has to confront these destructive powers.
The story is about a cosmic reconfiguration by Jesus.
The crossing from Jewish to Gentile territory is also significant. It is the bridging of Jewish and Gentile worlds. A new departure. This is the journey between the two. It fits between stories either on the Jewish side or the Gentile side. In our lives there are times when life kicks up a storm and we are afraid. We are very afraid and Jesus is telling us to do two things
1. Take command of what is destructive in our lives. Recognise and control it.
2.TRust that God is with us even in the really scary stormy times.